Many things have happened in the recent months in the Windows world. Microsoft has accelerated the release of Windows 10 mobile OS builds to the insiders in the fast and slow rings. PC builds got updated too. And now the Lumia 650 in what is perhaps the last Lumia with the legacy of the erstwhile Nokia also got announced and is up for pre-orders. However the sale may start from 18th Feb 2016.

Lumia 650 has all promising features and it fills the gap nicely between the new generation Windows 10 powered budget Lumia 550 and the flagship Lumia 950 and Lumia 950 XL. So Lumia 650 becomes the fourth model of the Windows Smartphone that has Windows 10 out of the box notwithstanding the eligibility of many other older Lumias currently running Windows 8.1 that might run Windows 10 mobile OS very soon. 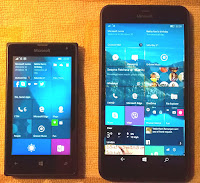 Windows Insider app has just been updated with 4 options now for Insiders. Very recently 'Production build' has come as an option. And now after the release of the build 10586.107, the Windows Insider app shows an additional option called "Insider Preview release".

So these are more logical now, considering that Microsoft is getting everything ready slowly but steadily for the formal release of the Windows 10 Mobile OS. So the four rings can be considered as 4 options for prospective insiders. The categorization of the Windows insiders is the same across PC and mobile users:

This is the ring where the enthusiasts who want to be more proactive would like to install and try the Windows 10 mobile OS new builds. These are the group of Windows fans who are willing to experiment a bit earlier and then give feedback to Microsoft and who want to be helping Microsoft build Windows 10 in a better way.

All Windows 10 updates come to Fast ring insiders first. Also the insiders in the Fast ring need to be aware of how to back up their stuff, use their primary phones carefully in case they install fast ring updates. Or better, they use many windows phones so that they experiment fast ring updates with their secondary phones and not with the primary ones.

Also the slow ring users provide their feedback but their job is a bit easier as they face less trouble compared to the fast ring insiders.

Release preview ring: This is the newest option made available by Microsoft and from the name it is clear that this is the ring where Microsoft wants to group all those insiders who don’t want to take any considerable risk. So the risk is minimal and this ring only includes updates from the current branch, as described by Microsoft.

Production build: This is the option given to insiders which is to quit all the above 3 rings but to stay inside the windows insider program so that the users need not uninstall anything or need not reset the phone using the Windows Device Recovery Tool. Also if they ever desire, they can once again start using any of the above rings, just by accessing the Windows insider app and just changing the option and reconfiguring/restarting their phones.

More information on the ‘Windows Insider’ program and the official descriptions provided by Microsoft can be found at this blog post: Windows blog on mobile build 10586.107 and 'Insider Release Preview' ring

We wish all the Windows users a great period ahead with nice updates to be installed, tried and enjoyed on a continuous basis. For all the effort Microsoft is putting into building Windows 10 simultaneously engaging their users, we hope that this hardwork bears good results.

At the end, a triangular competition between Apple, Google and Microsoft with lots of OEMs providing Smartphones bodes well for the software giants, OEMs and the end users. Duopoly and Monopoly are dangerous.