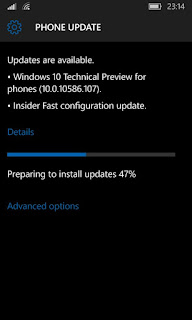 Windows 10 mobile new OS build 10586.107 has been released to Fast ring insiders now and this means we are inching closer to the official release of Windows 10 Mobile OS for all Lumia phones running Windows 8.1 also.

It is quite evident that despite the bad press, Microsoft is putting up all their hard work to achieve the gigantic task, to precisely polish the Windows 10 mobile OS build 10586. The release of new build 10586.107 insiders in the fast ring indicates that goal.

What has become the first official Windows 10 mobile build for Windows phones Lumia 950 XL, Lumia 950 and Lumia 550 during last November when the build number was updated to 10586.0. The full description was 10.0.10586.0 for these newer Lumia phones.

Of course all iterations were not released to insiders in fast or slow rings and many of those jumps in build iterations point to the fact that Microsoft has seriously put a lot of effort in refining things and all those skipped build numbers were perhaps the iterations that happened within the Microsoft's internal developers team reviews.

When is the official release of Windows 10 Mobile OS expected for older Lumia phones running Windows 8.1?

The blogs on Windows10 have repeatedly pointed out that if the iteration .71 of the build 10586 gets positive reviews it could become the official upgrade build for all Windows Phone 8.1 users but it seems Microsoft has still found some serious bugs also with iteration number .71, thanks to devoted insiders feedback, the build iteration jumped to .107.

Let us hope that this build brings success to Microsoft's mobile aspirations and brings happiness to those 1 million Windows10 mobile users most of whom are using the mobile OS through insider program.

At the outset it appears that the upgrade process from earlier builds to this current build is very smooth.

We have verified on Lumia 635 and Lumia 640XL that the build got updated very smoothly and no performance lags have been noticed yet.

So we had no need of resetting the phones to sort out any upgrade issues.

However as it is too early to say anything about this build, we shall wait to observe what Windows insiders are reporting to Microsoft through their Windows Feedback apps installed on their phones.

If the feedback reported is positive, then Microsoft would be much eager to release this version of the build as the 'Official Windows 10 Mobile OS' to all existing eligible Lumia or other Windows Phones.

Hence to know more about the real news and not fall prey to the rumors, stay tuned to ViprasCraft for Windows 10 mobile updates.