If your Windows Phone got stuck at spinning gears while doing any Windows 10 preview updates, or due to any unknown reason, or even if you want to switch back to Windows 8.1 because you don't want to experiment further the preview builds of Windows 10 (unless you get the final version) you can try Windows Device Recovery tool before taking your phone to a service center.

If you are using Windows Phone of any OEM (Original Equipment Manufacturer) like Nokia, HTC, Blu, or even Samsung, then you have this great option of resetting your phone or to reinstall your phone's OS (Operating System) very easily with the official software from Microsoft.

This software, even if the purpose remained the same, kept changing forms. In the past it was called 'Nokia Care suite' but was not widely available for the actual phone users, instead was available for Nokia care centers personnel.


Then it came to be known as 'Lumia Software Recovery Tool' when Nokia starting using the Windows Phone platform for their new Lumia series of Smartphones.

That gave way later to 'Windows Phone Recovery Tool' with some improvements to the earlier versions and for making the life of the phone user very easy.

Now, at this point of time (writing this article) the same software has been called 'Windows Device Recovery Tool'.

The tool however is very easy to use, you just need to download this program from Microsoft's official website and then it takes care of itself.

You need unlimited internet connection to your computer.

The only thing you need is a proper internet connection with a good download speed. This is necessary because the actual program is very simple to install and it is hardly in some tens of megabytes.

But while you connect your frozen or bricked phone to the computer using the USB cable and use this program, this program reads your phone's ROM information and starts exploring the formal available latest OS version for your model of the phone.

And it is exactly here that it starts download the OS which is about 1.5 or 2 GB to your computer locally, and at the end of it, it starts flashing your phone and installs the phone OS.

When you use this software your Windows Phone even if it is running Windows 10 builds (as of now), rolls back to Windows 8.1 as this is the official OS till Windows 10 gets the final shape and becomes the default OS for the Windows phones.

But nothing happens without your permission. The software reads the OS version on your phone if the phone is in stable condition and suggests that the available software on the device is the latest one compared to the one on the server.

That indirectly means that once Windows 10 gets official position as the default Windows Phone OS, the same Windows Device Recovery Tool starts installing Windows 10 builds from the server on to your phone(s).

Here are some screenshots of what this process may look like for you, while using this tool. 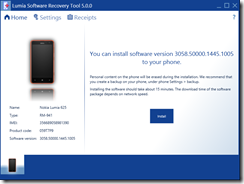 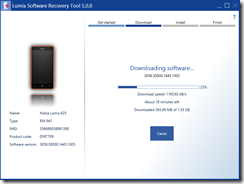 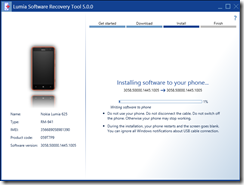